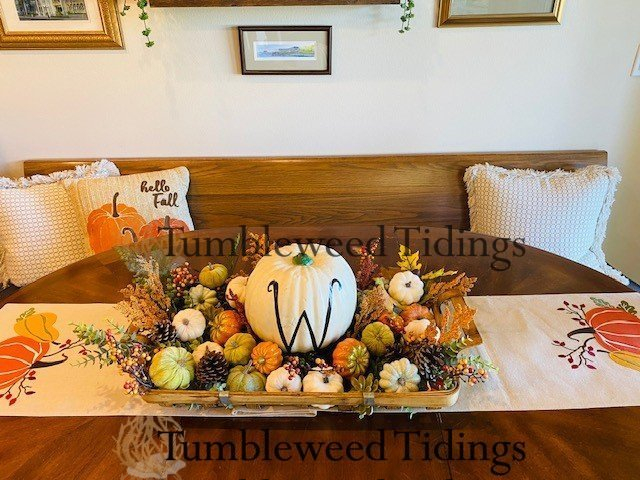 In honor of tomorrow marking the first official day of Fall, I’m sharing one of my favorite craft projects; taking several items and turning them into something useful for the home. In this case, it is a fall centerpiece for our kitchen table. Several months ago, I purchased a medium sized tobacco basket at a thrift store in Coeur d’Alene, Idaho. Mass produced tobacco baskets are everywhere these days, and are so-named because they replicate the originals which were used to dry tobacco leaves. I had been looking for a nice one, and this one was special because it was sturdier than most, and had metal strap accents, nice handles, and was older. I just knew I would love having it and would find so many uses for it…or so I thought. I brought it home, placed it on the bed in a guest room, and there it sat. And sat. And sat.

At this stage of my life, as we are thinking about the eventuality of downsizing some day, I have become must more purposeful about what I purchase for the home, buying only those things I know we will put to good use. Having this tray just sitting there for several months was a reminder that I had violated my own new rule.

So, armed with an assortment of greenery and fall sprigs, a large plastic pumpkin with our monogram on it, and two boxes of assorted green, white, orange, and blue pumpkins, I set out to create something fabulous…or at least I had high hopes!

First, I started with a base of some greenery and a candle ring in the center to hold the large pumpkin I knew was going to anchor the arrangement. After that, I added some fall leaves and berries around the sides, and then some light orange sprigs. The large pumpkin with it’s black W, was placed in the middle to create the height that a centerpiece needs to have dimension.

Next came the fun part; arranging all of the different small pumpkins around the base, starting with white, green, and pale blue, and trying to angle them in every direction to make it look natural. For more dimension, I sprinkled in four orange pumpkins, two of which had glitter on them. I have had these for years, and they show up in so many different places from wreaths to centerpieces. The addition of these four pops of orange was a small thing, but it made a big difference, and kept the overall arrangement from falling a little flat.

Last, I added some pinecones from the yard, as well as a couple of artificial succulents. The final step was to place a tan table runner with overlays of pumpkins on the kitchen table. After putting the arrangement on the runner, the project was done and I really love it.

I knew there would be a good use for this tobacco basket at some point, and I’m glad it worked out so well as a base for this fall arrangement. I hope this project may have inspired you to create a centerpiece of your own, using a tray, tobacco basket, or other vessel you may have laying around. My brain is already scheming as to how pretty this will look during the holidays with a large lantern in the middle with pine boughs, poinsettias, and pinecones sprinkled all around, glowing with candlelight. But, I’m getting a little ahead of myself, so I’ll close for now. Happy Fall, everyone!