When a candlestick holder isn’t… 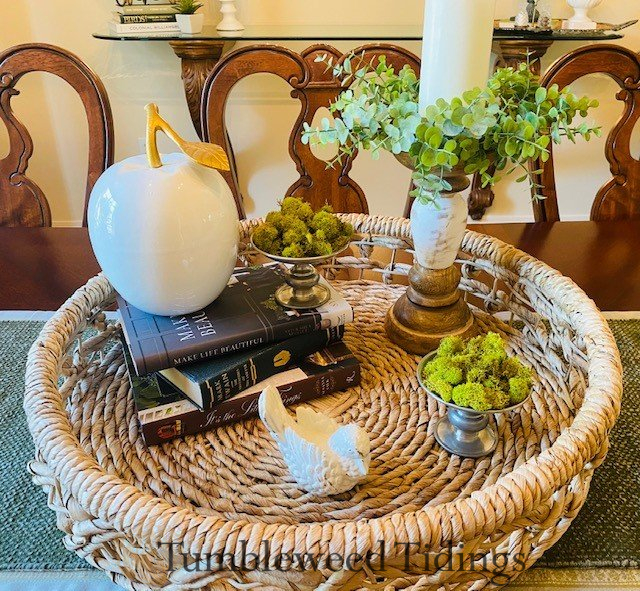 Do you ever look at everyday household items and think, hmmm, you could do so much more with your life?

Take the humble candlestick holder. Over the years, I have taken candlestick holders and used them for everything but holding candles. First, there was the candlestick holder turned upside down to create a cost effective topiary. I was so proud of myself after that one, I almost did my happy dance. You can read about that here: A Perfect Match…

Then there was the time I wanted a marble topped cake stand, found some old marble trivets languishing in a drawer, and went in search of a base. I was hoping to find a cheap wooden base, but that day, the universe led me to a pair of heavy green metal candlestick holders at the Goodwill that were too good to pass up. By gluing the marble trivet to the candlestick holder, Voila! I had a pedestal that saved me about $50 over the one I was trying to mimic.

Last week, I decided to lighten up our dining room table decor for summer and bring in a large, actually HUGE, wicker basket that I got on clearance at Ballard Designs. I filled it with some books topped with a white ceramic apple, a wooden candlestick holder with greenery, and a small bird.

Even thought it felt fresher and more “summery,” it seemed like something was missing, so I went on the hunt for just the right thing. Before I streamlined the table for summer, there were two groupings of candlestick holders in varying heights at either end of the table, including a pair of small pewter ones from my in-laws home in New Hampshire. As I was getting ready to put them in my decorating storage closet, I thought “what if I turn them over and put something in the recessed base?” Cue the lightbulb going off:)

So I flipped them, and there was a nice bowl shaped cavity just waiting to be filled with something wonderful. In my craft closet, I had a bag of moss that was about a third full…coincidently just the right amount to fill both upside down pewter candle holders. With the addition of the lime green moss, these bowls…I mean candle holders, were just the final touch the arrangement needed.

In another “I’m going to use you for something other than what you were intended” moments, I purchased three cylindrical vases at the Dollar Tree one year before Christmas. But instead of filling them with florals, I filled them with…wait for it… candles! The three fit beautifully in the wooden trough my husband built that sits on our kitchen table year-round, and it works so well.

I have tied ribbons around them for the holidays, but most of the year they are plain and surrounded by greenery balls, pinecones, and dried artichokes. Dollar Tree for the win!

Just to set the record straight, sometimes I actually use candle holders to do just that…hold candles. They are all over the house, and one of my favorite decorating accessories. But other times, there can be good fun in finding new uses for ordinary objects and reimagining them as something totally unpredictable. It stretches my creative muscles and makes our home quirky and one-of-a-kind…just like us!