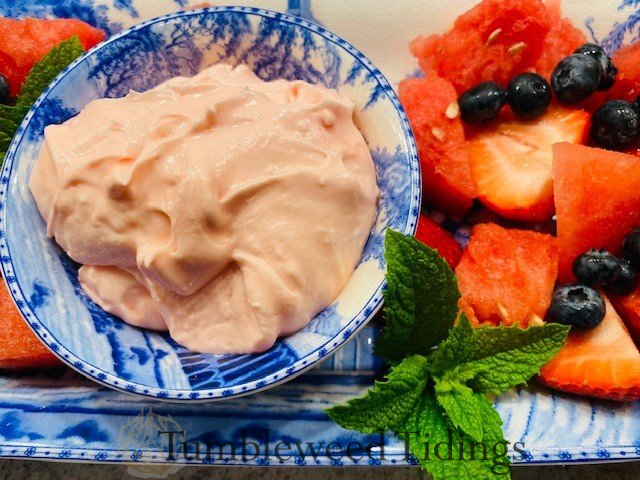 Welcome to Tumbleweed Tidings as we are in the middle of Memorial Day weekend. I come from a long line of military family members. Both of my grandfathers served in Europe during World War I, my father served Okinawa in the Navy during World War II, and my husband served for 24 years in the Navy. To say that I have respect for the military and all that they do is an understatement, and I was pleased to learn recently that I can trace my ancestry on my father’s side back to the Civil War. For me, Memorial Day is not only a way to honor those who have made the ultimate sacrifice, but it is personal, as well.

Later this afternoon, we are heading over to our neighbors for a Memorial Weekend BBQ. I am bringing two appetizers and some rosemary roasted potatoes. What was fun about making the appetizers was that I found a way to make two completely different dishes, using one brick of cream cheese.

For the first “healthy” appetizer, I made a fruit platter with a creamy fruit dip. To make the dip, you use 1/2 of an 8 ounce brick of cream cheese…which is just a fancy way of saying 4 ounces:) To the cream cheese, you add half of a 7 ounce jar of marshmallow cream. Add two tablespoons of maraschino cherry juice and 1/2 tsp. of vanilla. Whip with a hand mixer until well blended and fluffy. Put the dip in a pretty bowl, chill until ready to use, and serve with the fruit of your choice. Because it is Memorial Weekend, I used strawberries and watermelon, sprinkled on some blueberries and placed on a blue and white platter. For the garnish, I cut some fresh mint from my herb garden, and it was ready!

For the next appetizer, I used to other 4 ounces of cream cheese and spread it on a blue and white plate. Then I took about 1/3 cup of Pomegranate pepper jelly, made in Oregon BTW, and microwaved it for about 20 seconds to thin slightly. I poured the jelly over the cream cheese, placed it beside a bowl of crackers, and Voila! it was done as well.

I have made appetizers that take hours to prepare, and some of them are totally worth that level of effort. But today, I decided to keep it light, breezy, and oh-so-simple. If you need a last minute side dish or appetizer to take to a party or enjoy at home, start with a brick of cream cheese and let your imagination run wild.