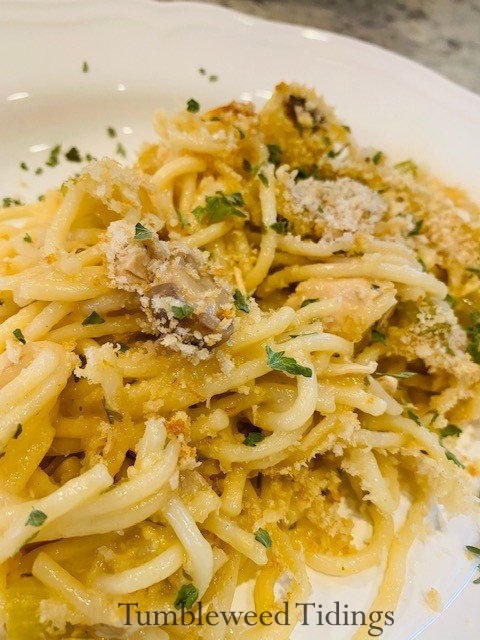 If you still have turkey leftovers that you would like to create in a new, simple, and tasty way, stay tuned. I’ve got you covered! I don’t know about you, but whenever we cook a turkey, the leftovers go on for days. We had the full meal deal a couple of nights, then I made a delicious batch of turkey noodles, and today it’s time for a little Turkey Tetrazzini. As you will see from the story below, I haven’t changed my repertoire much over the years! Let me know in the comments if you have a great way to use up turkey leftovers. I’m all ears!

First, a cute story about my middle child Robyn, circa 1981. She is an early December baby, so when she was almost two, we had just had Thanksgiving turkey with all of the trimmings, and ate them reheated for a couple of dinners. Next I made the turkey noodles, again for a couple of nights. In desperation for another way to use up the turkey, I found a recipe for Turkey Tetrazzini in my trusty Betty Crocker Cookbook. When I put Robyn’s plate on the highchair tray, she asked what it was. I said it was turkey. Wrinkling up her nose, she said “I can’t like it, turkey!” Obviously she was just as tired of turkey as the rest of us, and no amount of reimagining it was going to make it any better:) This grammatically challenged phrase has become a staple in our family for almost 40 years now, and is used for all manner of situations, from a paint swatch to a new recipe, and “I can’t like it” will always make me smile. It’s a good thing the three children were so cute and such a source of fun and amusement in those days, because with no computer, no Netflix, and not much money, they were all the entertainment we had!

Okay, thanks for the obligatory trip down memory lane, now let’s get cooking! Most of the year, I call this Chicken Spaghetti, but when I use turkey, I fancify the recipe by calling it Turkey Tetrazzini. Today, I am making the very basic recipe, and then on the downloadable recipe card below, I give a couple of suggestions as to how you can freestyle it to fit your tastes and preferences.

The ingredients are simple; turkey, spaghetti noodles, cheese, mushrooms, celery, onions, spices, chicken stock, flour, butter, and panko. Start by cooking the celery, onions and mushrooms in butter until softened. Cover the cooked vegetables with flour and toss to coat. Add the chicken stock (or part stock and part white wine if you prefer) and stir until the sauce begins to thicken. As a reminder, this sauce is very thin to allow for the pasta to soak up some during baking. Once the sauce is thickened, if you added carrots, peas, turkey, and some heavy cream, you would basically have the filling for turkey pot pie…just in case you want to go in that direction instead.

To the thickened sauce, add the diced turkey and the cheese. As I stated in the Helpful Tips section of the recipe card, cream cheese makes a rich addition to this recipe. Once all blended, pour the entire mixture into a greased 9×13″ baking dish and top with the panko breadcrumbs. They will add a nice crunchy topping. Bake at 350 degrees for 25-30 minutes or until bubbly and golden. I will sometimes finish it off under the broiler for about 2-3 minutes if the crumbs are not golden enough. If you put it under the broiler, DO NOT WALK AWAY! (Just trust me on this:))

Total aside: One thing you may notice in the photos on this post are different backdrops than my typical kitchen shots. That’s because we are taking a few days off to spend at our bungalow in Northern Idaho…where it started snowing today!

The one thing I love about cooking here is that the stove is gas, whereas at home, I have a glass cooktop. I am not totally used to gas, even after using it here part time for four years, but the funny thing I noticed today was that the veggies cooked super fast and the pasta cooked super slow. I am sure there is an extremely scientific answer to this like altitude or ??

So there you have it, my version of a classic and often used recipe for turkey leftovers, Turkey Tetrazzini. For full disclosure, after baking this batch, it could have used a little more liquid in the finished product. This could have happened because the sauce reduced too much while waiting for the pasta to cook, the pasta absorbed more liquid than usual, or this gas oven cooks quicker than mine at home. Either way, the sauce needs to be much thinner than you think, and can be corrected by adding more chicken stock or some pasta water to loosen it up. But thicker sauce or not, it tasted amazing nonetheless. Served with a side of a crisp salad or steamed vegetable it contains everything I love in a meal; something that’s hearty, healthy, and contains pasta…