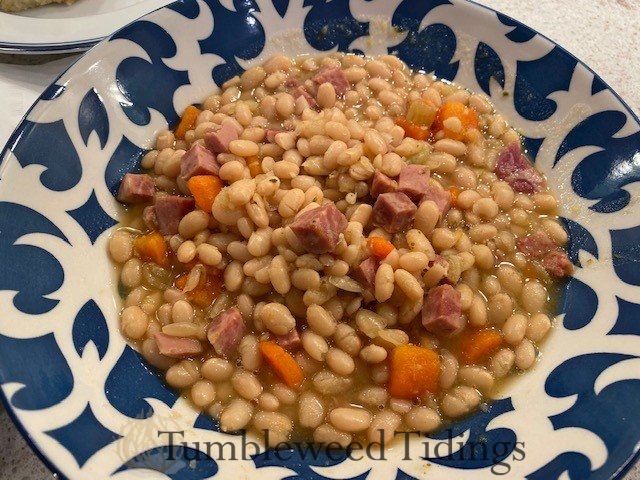 Welcome to Tumbleweed Tidings! I hope this post finds you safe and well. Before I jump into today’s post, I wanted to ask you a favor. If you haven’t subscribed to my blog, could you please do that. I want to make sure you don’t miss any posts and subscribing is the best way to ensure that. Also, if you could forward posts that you think your friends might enjoy and ask them to subscribe, that would be great! And now, for today’s stay-at-home comfort food.

Since being self-quarantined like most of our nation, I have really enjoyed cooking recipes that I haven’t made in a while, and that include some seldom-used pantry items. Most of these dishes fall under the category of comfort food; meals that cook all day and make the house smell wonderful like a big, warm hug. That seems to be what we are all craving right about now.

For today’s comforting recipe, I made Ham and Bean soup. Growing up, I always looked forward to when we had a baked ham for Sunday dinner, because that meant that ham and beans wouldn’t be far behind. Once we had gotten a few good meals and sandwiches out of the ham, it was time for my mother to boil the ham bone and leftover ham, soak some Navy Beans, and make the most delicious soup ever in the history of soup. Seriously. Served with bread and butter, well, this girl was in hog heaven. See what I did there…hog heaven, ham…:)

The making of this dish is so simple it really doesn’t require much of a recipe, but I will walk you through the steps. Starting with dry white Navy Beans, a staple in many pantries, rinse and sort the beans and place in a large stew pot. Cover with water and let soak overnight, or 6-8 hours minimum. (If you forget this step the night before, follow the quick soak method on the package to make the same day.) In the morning, drain the soaking liquid, and rinse beans. Place back in pan and set aside.

Next, cut up the Holy Trinity of veggies, onions, carrots and celery, and place on top of beans. Add a ham bone or two ham hocks, and some diced ham. If the thought of ham hocks make your squirm, you might want to look away right now:) They are for flavor and there is really nothing that compares. For the diced ham, I added a package of Smithfield diced ham. Smithfield ham, made in you-guessed-it Smithfield, Virginia, have come out with a line of “Anytime” ham steaks, as well as minced and diced ham. They are so delicious and convenient, freeze well, and make it so easy to use in minced ham and scrambled eggs, quiche or soups. Game changer.

I’ll get back to the recipe in a second, but first, a funny aside about Smithfield hams. The first time my husband took me on a trip east of the Mississippi, we went to Colonial Williamsburg, Virginia for their Grand Illumination Celebration the first weekend in December. This is when they decorate for Christmas, have holiday festivities and tours, and the weekend is capped off by the lighting of trees and a fireworks show over the Governor’s House. For dinner the first night, we ate at Chowning;s Tavern, where everything was as it would have been in colonial times. The windows were decorated with greenery and wreaths with fresh fruits and nuts attached, including miniature pineapples. All of the lighting was by candlelight, and the waitstaff were dressed in period garb. When a gentleman came in and started playing songs on the piccolo and flute he pulled from a bag on his shoulder, we were transported to another time. As we ate our appetizer course of Welsh Rarebit; a piece of toast, covered with a warm cheese sauce, which they had enhanced by using Smithfield ham, I looked around the room, and thought to myself “If there is anything more quaint than this, I don’t know what it is.”

Okay, after that trip down memory lane, back to the ham and beans! Next, cover the beans with enough water to cover, add some parsley, thyme and bay leaf, but no salt and pepper at this point. The ham adds enough salt for most people, but you can check for seasoning before serving. If you are making this in a vegetarian style, then still wait until the end to season, as salt can make beans toughen during the cooking process.

Simmer the ham and beans, covered, on low for several hours, checking to make sure the beans are soft before serving. This can take anywhere from 3-6 hours, depending on how fast of a simmering boil you use. Remove the ham hock and discard. (Some ham hocks are full of meat, which you can cut up for the soup if you want.) The beans will soak up much of the water, so before serving, you can add more water to reach your desired thickness, and season to taste. I didn’t add more water because we prefer a thicker soup, but this is a matter of personal preference.

To accompany our ham and beans, I made a loaf of beer bread, fresh out of the oven. I have a wonderful recipe for beer bread, but it requires using self-rising flour, which I have to buy special for that one recipe. Instead, I typically use the Tastefully Simple Beer Bread mix, which is outstanding. You just add beer or other sparkling beverage to the mix and wonderful things begin to happen. I used a bottle of Corona I found in the back of our beverage cooler, and when it hit the mix, it smelled amazing. After mixing, spoon into a loaf pan, and top with 3 Tablespoons of melted butter (optional.) Hey, I didn’t say this meal was low fat, I said it was comforting!

So there you have it; today’s nostalgic meal using pantry items, some fresh veggies, and ham. If you haven’t made a ham and bean soup lately, I would highly recommend it. It is loaded with heart healthy fiber and downright cheap to make. But best of all, it might transport you back to your childhood, and feel like a great big hug. And that might be just the thing we all need right about now.