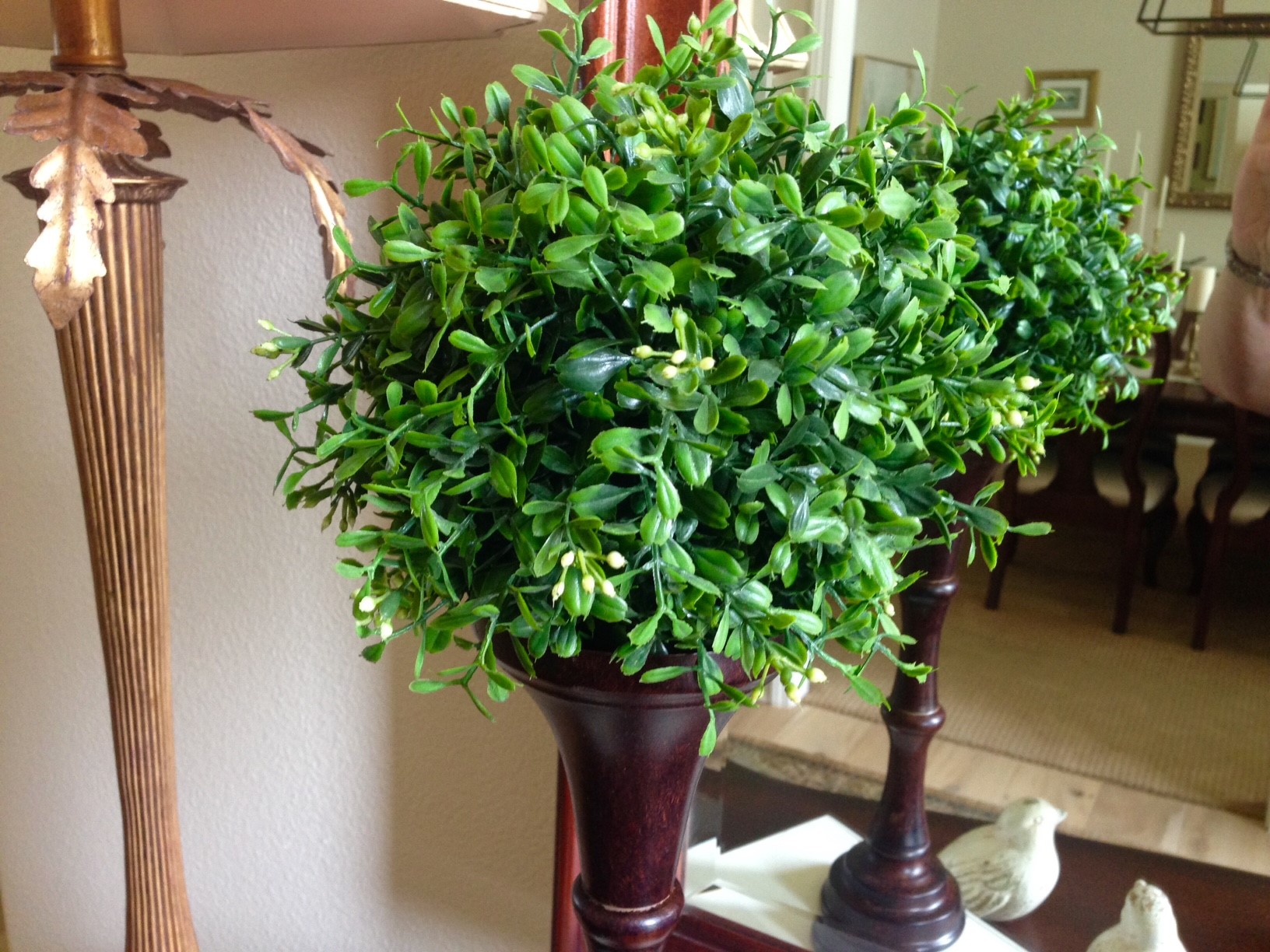 Once upon a time, I was obsessing about all of the lovely topiaries that were showing up everywhere in the home décor world.  Over the years, I have had various versions of real topiaries, made from lavender, rosemary, and other greenery.  They look cute for about 15 minutes and then I kill them with too much love…I mean water.  So artificial it was going to be!  Then I discovered that the really nice artificial topiaries were fairly expensive.  Some were in the $30-$50 range, which was much more than I wanted to spend.  Those that were less expensive had cheap-looking greenery, which is a pet peeve of mine.  What was a girl to do?

Now, no one that knows me very well would call me extremely cheap, but I do love a good bargain and “getting the look for less.” As I was mulling over my options, I went to look in my home décor closet.  (I will NOT be showing a picture of that closet, just in case any of my readers have a weak heart.) And then, in the middle of the, shall we say “messy” closet, the home décor fairy smiled on me.  I saw some round teaberry balls and a couple of metal candlestick holders.  I thought “those two were made for each other.  Maybe they should get married!”

I tried the short one first but decided on the taller one.  One teaberry ball, and one old metal candlestick holder, equals a one-of-a-kind and totally unique topiary.  It filled the space I wanted it for perfectly, and even though it doesn’t have the twisted wooden stems like the ones I had been secretly coveting, I love it even more because it’s quirky.  (Do you think I should have cropped my arm out of the picture below?!?)

As an added bonus, it was cheap.  The teaberry balls cost $6 each when I bought them several months ago, and they are variegated, so they look fairly real.  I’ve had the metal candle holders for years, so this was definitely an almost-free experiment.  Side note: I actually used the larger base end for the greenery and the small end that was supposed to hold the candle for the base. In a more efficient way of saying this, I turned the holder upside down:)

Encouraged by this successful union, I took a larger teaberry ball and placed it inside an antique copper planter.  Not rocket science, but success again!  It totally looks like a real plant and adds a nice splash of greenery to my kitchen counter.  Maybe I was on to something…marrying disparate home decor items could become the next “big thing.”

The last of my matchmaking adventures resulted in the marriage of a few items that alone, weren’t getting much use. A few years ago I purchased a Pottery Barn beverage dispenser that stands on a white porcelain pedestal. I love using it, like recently when we had a houseful of kids and grandkids. I filled it with lemonade, floated some strawberries, lime slices. and blueberries and everyone could just help themselves.

But cute as it is, most of the year, this dispenser languishes in the dark cupboard. However, the pedestal is really nice, so I decided to marry it with a teaberry ring, and in the center, the Magnolia Silos candle I got in Waco, Texas. I mean, it’s like they were made for each other!

So, the next time you are looking for a way to add something unique to your home décor, try channeling your inner matchmaker and do an accessory mashup. Who knows? If they’re compatible, they might even live happily ever after…