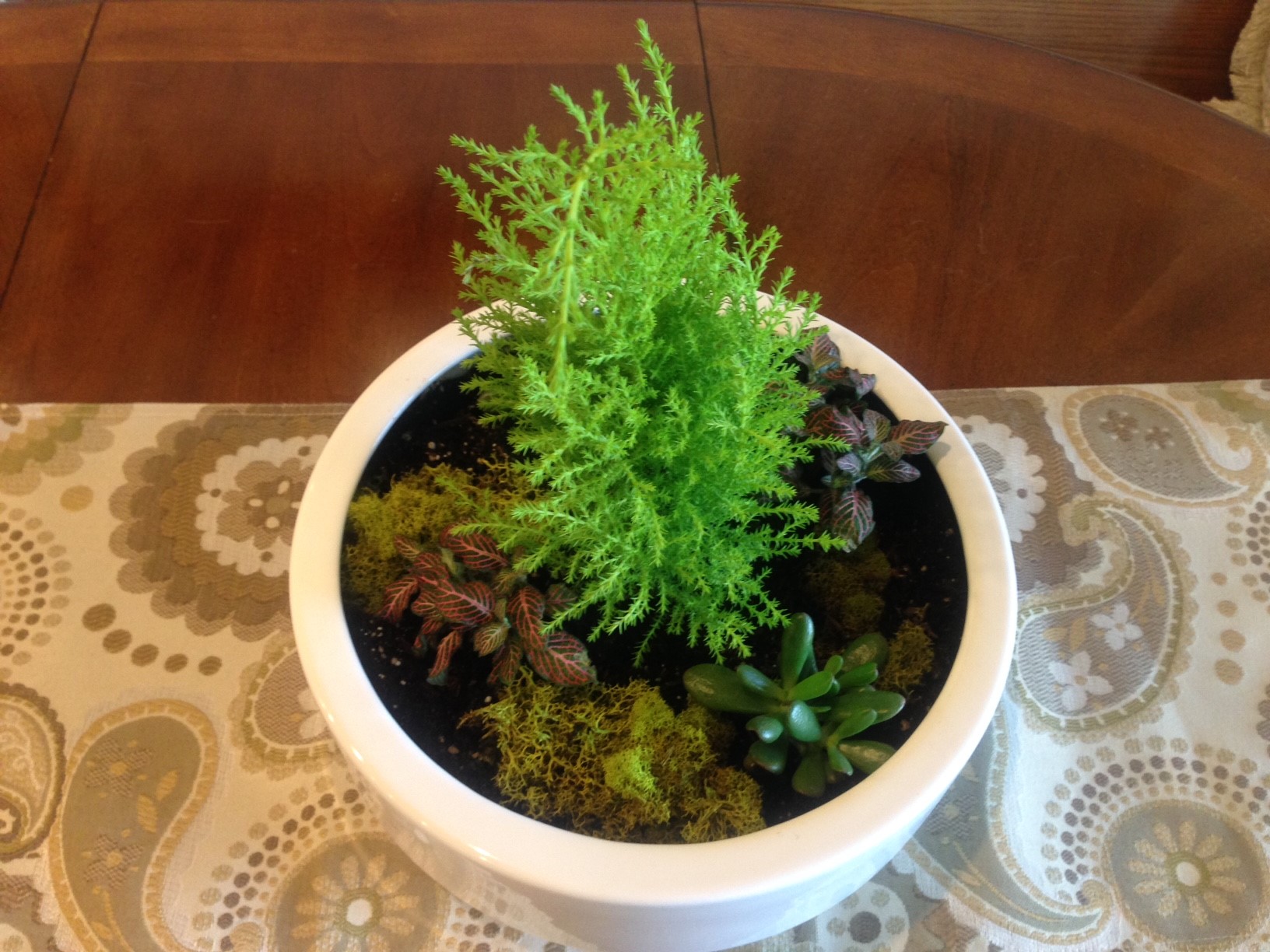 Spring is here and in addition to filling all of the outdoor pots with flowers, I decided my indoor greenery could use some updating as well. A couple of weeks ago, we were at a Silent Auction fundraiser where someone had donated a small glass terrarium. The minimum bid was $5 and throughout the evening, no one had bid on it. So, I placed a bid for $6 and SOLD! to the lady who really didn’t need a terrarium:)

Now that I was the proud owner of a terrarium, it only made sense to fill it up. If you are like me and lived through the 70’s, you are no stranger to terrariums. They were all the rage and every mid-century modern home had one or more. In fact, the 70’s were a time for excessive indoor greenery to soften all of the hard lines of the mid-mod décor, and I have been noticing the return of that trend on some of the decorating shows I watch. My little terrarium isn’t really a terrarium in the true sense of the word, because it isn’t self watering or enclosed enough to create it’s own atmosphere. But it’s cute and I had an investment in it, so it was time to fill it up!

First, I cleaned the vase and filled with new potting soil. Then I added four succulents around the center plant, which is larger and adds a pop of red to the mix. Next, I finished with some moss, which really softened the whole look and added a nice pop of lime green. After misting and watering in all of the plants, I stood back to admire my handiwork, and I love it!

Because I still had some extra plantings, I got out a large white ceramic bowl I had used on our patio last year, and filled it up with a large Cyprus in the middle and more succulents and the red foliage. Around the edge, I filled in with more of the moss. It now sits proudly on our kitchen table as our new centerpiece, and adds just the right pop of height and color for the summer season. Additionally, it will benefit from being right next to the slider with all day natural light.

While I was at the grocery store the other day, I spotted some lovely orchids that they had brought in for Mother’s Day. After living in Hawaii, I have a real soft spot for orchids, so I purchased a small white one. When selecting an orchid plant, it is best to find one with lots of unopened pods on the end of the branches to extend the flowering life of your plant. It there are several unopened pods, the orchid will continue to flower for a month or more, making them a great floral investment.

There were a few tips I learned about orchid care from our former neighbor who raised them and participated in orchid shows. First, orchids go dormant. When they do, you can just put them outside and water twice a week until they bloom again, when you can bring them back indoors to enjoy. In the winter, they can be put in a sunny window out of the way until they bloom. Some orchids bloom only once a year, while some bloom a few times annually.

Second, the best way to not overwater orchids is to just place a couple of ice cubes on top of the plant every few days to allow for a slow absorption. Lastly, orchids like to be fertilized “weakly, weekly.” This can be done with a small amount of Miracle Grow or other fertilizer, mixed with water and used sparingly each week. This will promote flowering and ensure a healthy orchid.

While I had my potting mix out, I took that time to refresh some of the existing indoor plants with some new nutritious soil. Over time, my plants develop a hole or divot in the center where I water. So, periodically, I add new fertilized soil to the tops of the plants to keep them healthy. Once this has been done, they hold the water better and develop a more beautiful green color. This is also a good time to lightly dust the leaves, as that is where the plants breathe.

Giving my indoor plants some TLC, as well as creating a few spots of new greenery and flowers added such life to the rooms, as well as a seasonal freshness to the whole house. I hope that my efforts to exercise my Green Thumb have inspired and encouraged you to bring a little of the outdoors inside this season!

My style is something I call
"Traditional Living with a Twist"
and I believe anyone can have a beautiful environment regardless of budget.