I Want my Mummy… 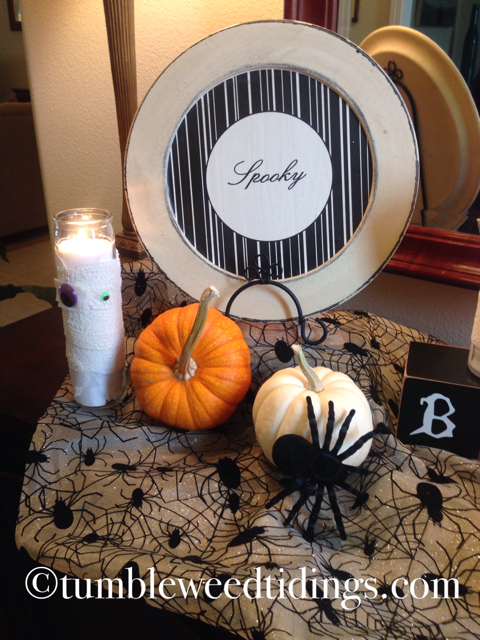 Today I’m sharing another quick and easy Fall decorating idea; this time for Halloween. When my children were younger, I decorated for all occassions. It seemed to be a nice way of marking time through the calendar year and making the house look festive. Seasonal decorating also provided some much needed creative therapy for me.

Halloween has never been my favorite occasion, but as far as the kids were concerned, any holiday involving bags full of candy was the sure winner. For years I fooled myself, saying all of this decorating was “for the children,” but in reality, I enjoyed the process. Many years after the kids were gone, I continued to change out my décor seasonally, especially if we were hosting Thanksgiving, Christmas or Easter. Then the grandchildren came along (Yay!) and I had a new audience for seasonal décor. 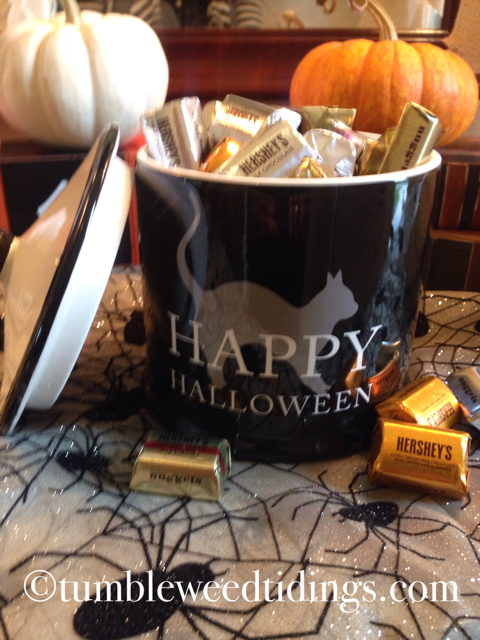 It’s been several years since I’ve pulled out my small “Halloween Décor Bin” and I was pleasantly surprised by the yield. First, I found two large pieces of glittery, sheer fabric covered with spider webs and spiders. This fabric is from when I had my store in Hawaii over 10 years ago, and was the foundation for the Halloween merchandise display. Since I’m only decorating the entry credenza, this would work! 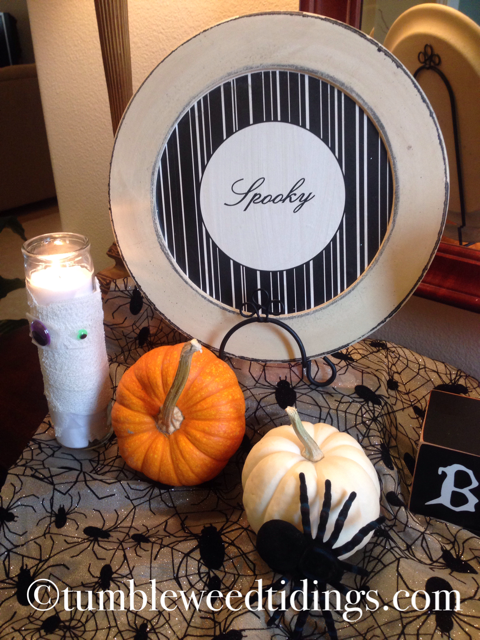 Next, I went to the Dollar Tree and purchased three of the chapel candles in white. These were the jumping off point for my homemade mummies. Starting at the top, I wrapped them in no particular pattern, with white gauze. After that, I applied googly eyes in different sizes and colors, using a glue gun. You can apply a felt mouth if you want, but that is optional.  On a couple of them, I left some of the gauze dangling on the side, which made them look even more mummy-like…

The three mummies were scattered at varying heights on the shear fabric. You can use books, boxes or plastic containers under your fabric to provide different heights. After placing the candles, I filled in with some fresh white and orange pumpkins. A “Spooky” wooden plate, candy dish, some spiders, and a wooden BOO sign completed the look.

The cost of the mummies was about $5 for all three. The gauze was $1 at the Dollar Tree, as were each of the candles, and the googly eyes were .97 at Walmart. The gauze can be attached with either a glue gun or just tied off for a more organic look, and these mummies only get cuter the lower the candle burns in the glass.

Because we get so many trick or treaters in our neighborhood, I decided to decorate the credenza this year, as that is what the kids will see when we open the door. I have to admit that it was fun to pull this little area together. The day after Halloween, everything will return to the Fall décor. But until then, I want my mummy(ies)!