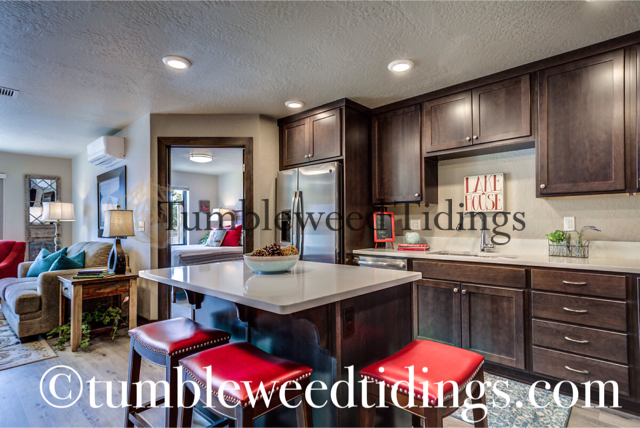 As those of you who follow my blog know (and are probably tired of hearing about!), I spent much of last summer preparing to decorate some new-build waterfront condos in Sandpoint, Idaho. From the first time I visited the construction site last spring, I have been selecting the color palettes, ordering furniture pieces and gathering a wide variety of bedding, artwork and accessories. 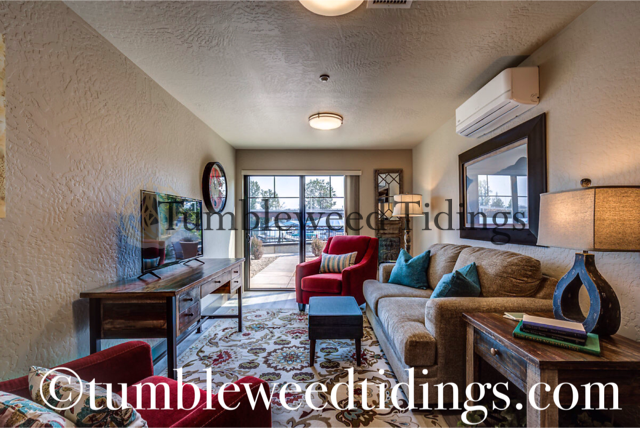 Initially, I had been hired to decorate a one-bedroom unit on the second floor and a two-bedroom unit on the ground floor. I selected two similar but unique color schemes that had a nod to the marina right outside the windows. Because we had a long-planned vacation that took us away for the larger part of July, I had everything purchased, ordered and in storage for the installation long before we left.

While in London waiting for our flight home, I received an email from the developer asking me if I could decorate one more unit, a one-bedroom with an office, on the ground floor.  Additionally, they had some furniture from a model home in another development that had recently sold and hoped I could incorporate much of it in this unit. Challenge accepted! 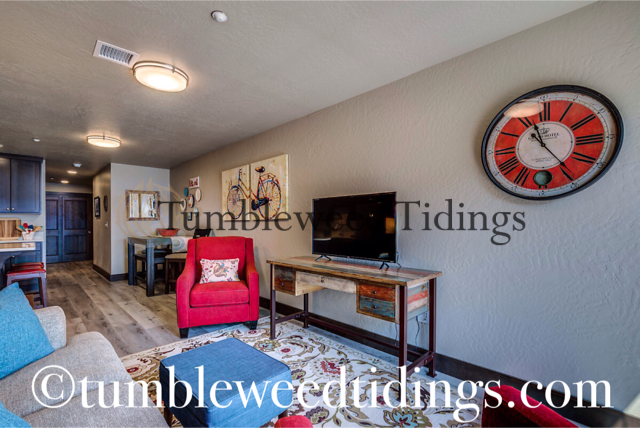 My husband and I drove up to take a look at these furnishings, and after taking inventory, decided much of it could be used. Since these three condos are the only units in the building that are not being sold to homeowners, but rather being held for the vacation rental market, the exact style of furnishings wasn’t as important as if we were staging the condo for sale.  This was the perfect time to re-use and recycle the new furniture they already had.

The catch was that, unlike the other two units where I had a palette of navy, aqua, teal and grays, these pieces of furniture were a tan couch, and, wait for it…two large RED chairs. Whoa, this was going to be fun. I set out to find items that could tie all of this together and was able to purchase some custom pillows on Etsy that used red, aqua and tan. Even thought they were only two small lumbar pillows, they re perfect! Then I found some nice blue pillows for the sofa, that reinforced the color scheme. 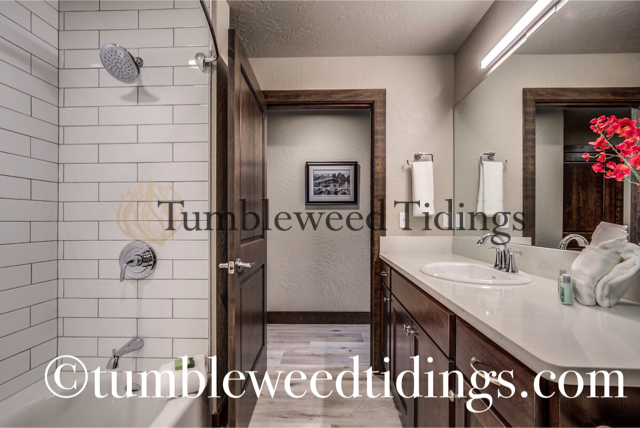 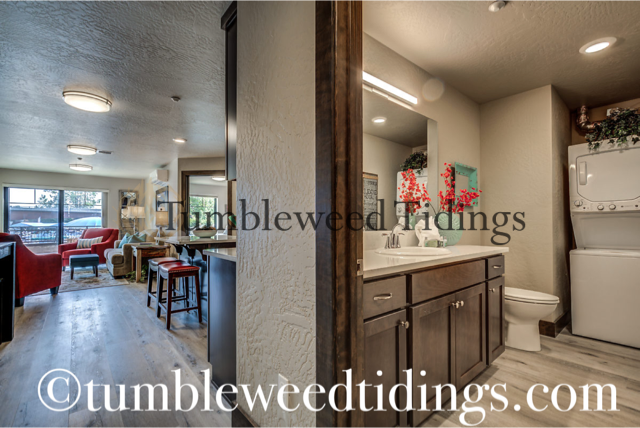 They had several large pieces of artwork, so we used a beautiful dock scene over the sofa and a pair of bicycle prints for the area between the living room and dining room.  In the dining, my sister Loralee (who graciously came onboard to help with these projects) and I created a plate wall with a “Let’s Eat” sign, some plates and a framed notecard that she had handmade. A mirror on the end of the dining room completed the scene and reflected some light into the space from the one window. 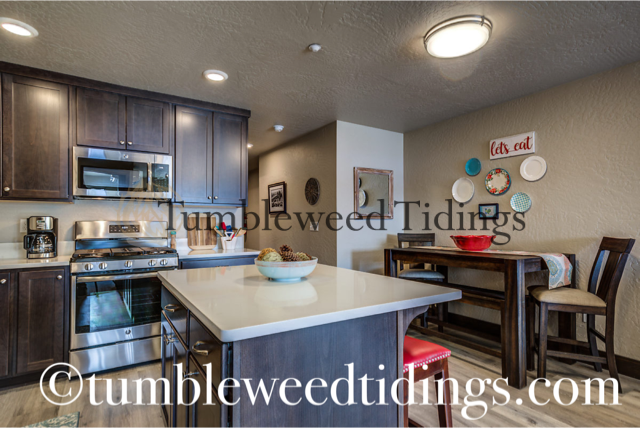 The master bedroom was done in a quilt of tan, gray and white. I found two red pillows to bring a small dose of red into the room, and a surprise find, a cute bicycle pillow found at Walmart to go along with the bicycle picture in the living room. The nightstands and lamps were from the previous model home and we re-used them.  The lake picture was a custom piece made by Diana at Oak Street Mercantile in Sandpoint.  It brings in a little more of the aqua, which I wanted to do. 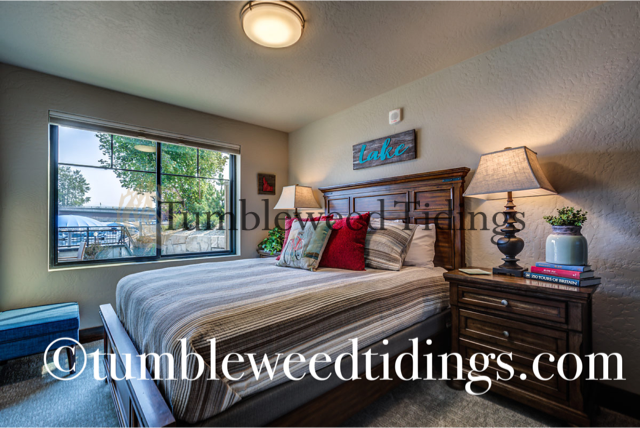 In the kitchen, I added some small accessories in white, aqua and red, using spatulas, a cute red chalkboard, and old cookbooks, among other things. The barstools are a saddle style in red leather with nail head detail.  The small pops of red against the beautiful cabinetry and backsplash really pop,  And the large island is such a fantastic space for dining or use as a buffet server when there’s a crown.  The white quartz is a beautiful, easy care choice. 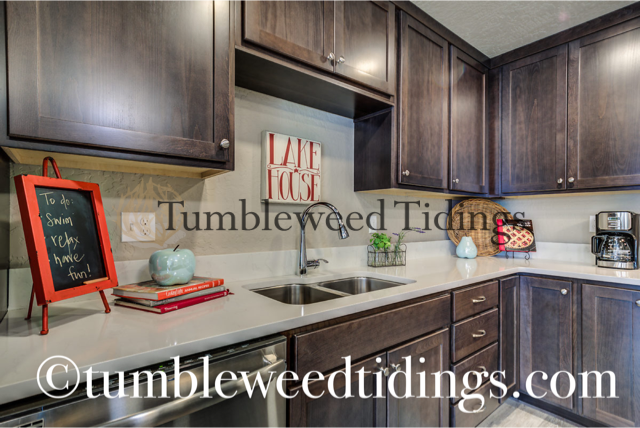 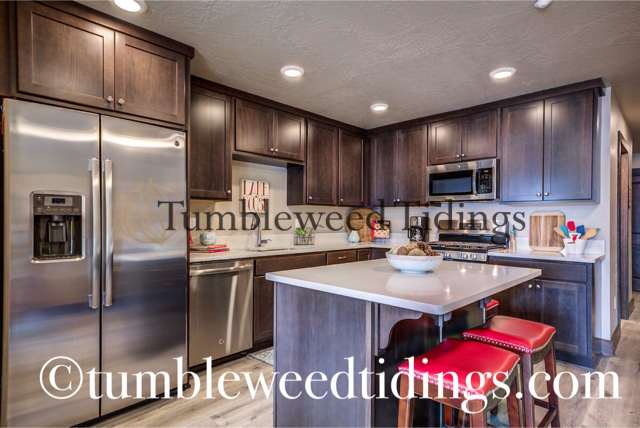 At the front of condo, there is an office space that we decorated with a twin bed/trundle configuration. It has a quilt of navy, gray and tan, and artwork that features paddles and boats. When I found the AHOY sign at Home Goods that was in the exact colors of the quilt, I couldn’t get it in my cart fast enough! All in all, this small room is functional and can still be used as an office space if someone desired. 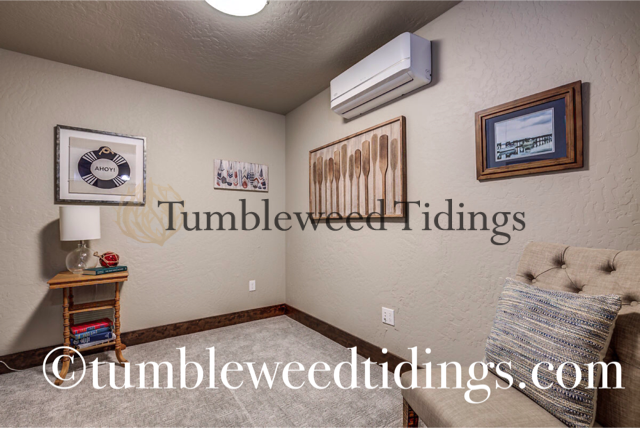 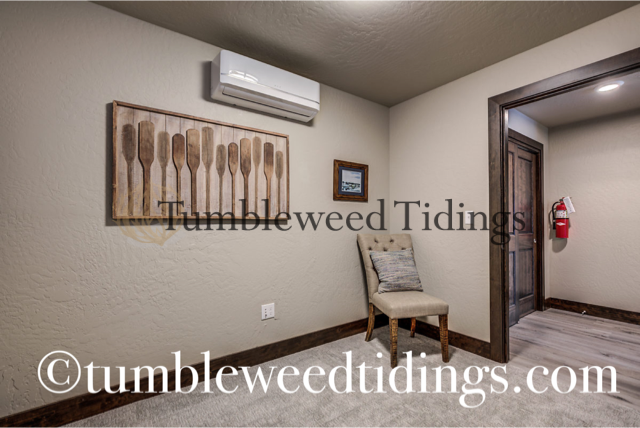 *Note*  A funny thing happened to this office after we had decorated it. We used the twin/trundle that the developer owned, but staged it as a daybed,  The fire inspector could not allow this, because even though it is only about two steps from the front door, without a window, this room did not comply with two emergency egress options.  So the twin was removed, and I recommended that they move the small sofa from the living room in there to make it a tv hangout room.  Then they will purchase a new sleeper sofa for the living room, allowing the unit to still sleep four.  It was so cute as a small den/sleeping area, but safety is most important. 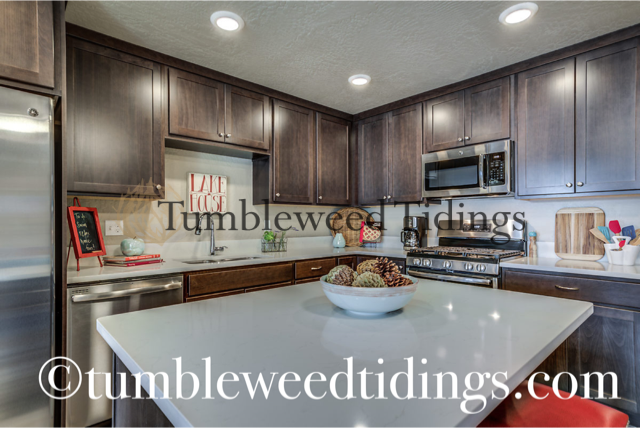 There ended up being many things I liked about decorating this third condo.  First, by making existing furniture pieces work (especially in a strong color like red), I was really stretched to pull it all together and still reflect the style used in the other two units.  Most of us have pre-existing pieces in our homes that we have to work around, so this was not an unusual scenario. The red was a little tricky though, because red isn’t having much of a “moment” right now, so pillows and accessories were harder to find.

Also, like Condo #1, this unit is on the ground floor, with a lovely patio and outdoor eating area that abuts to the boardwalk around the marina.  You can’t be much closer to the water without being on a houseboat! 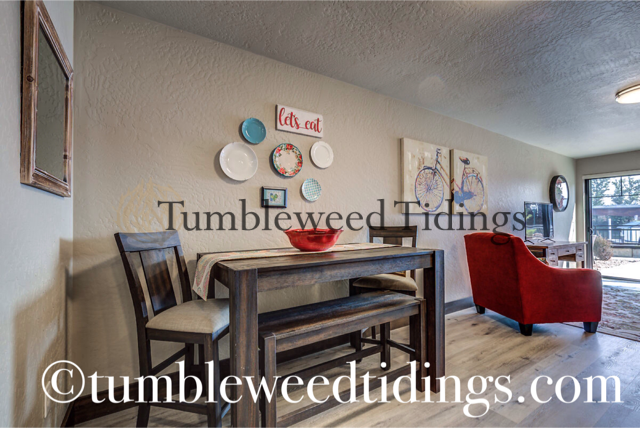 If you are faced with the scenario of color schemes that aren’t being shown everywhere, there are wonderful handmade options in custom fabrics on Etsy that tie almost any color combination together. The people who make these items are really great in both their customer service and quality. The pillows I ordered even came wrapped in tissue with a handwritten thank you note from the woman who made them! Custom is a good option for just about the same price. If you don’t believe me, just go to Etsy and search for “red and aqua lumbar pillow” or “blue floral pillows” and see what comes up. It is impressive. 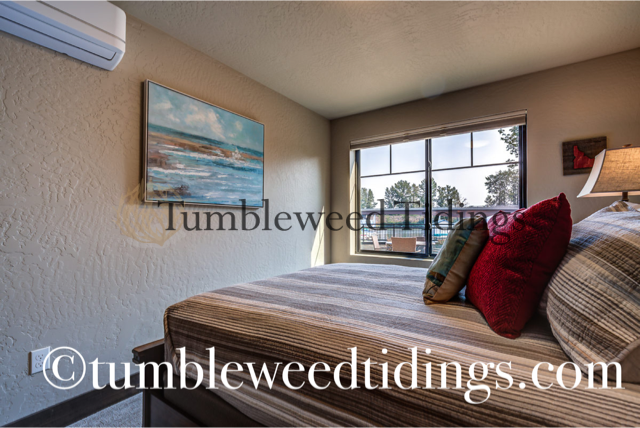 So that wraps up the series on the three Sandpoint, Idaho condos.  I hope you’ve enjoyed them all, and I’d love to hear in the comments below which one was your favorite… Condo 1 in aqua, Condo 2 in navy, or Condo 3 in red.   Initially, this wasn’t my favorite of the three, but after looking at the pictures, I am pleased with the way it came together.  It’s bright and cheery, and best of all, the customer liked it.  And when the customer is happy, well, you know…