The Flowers of London… 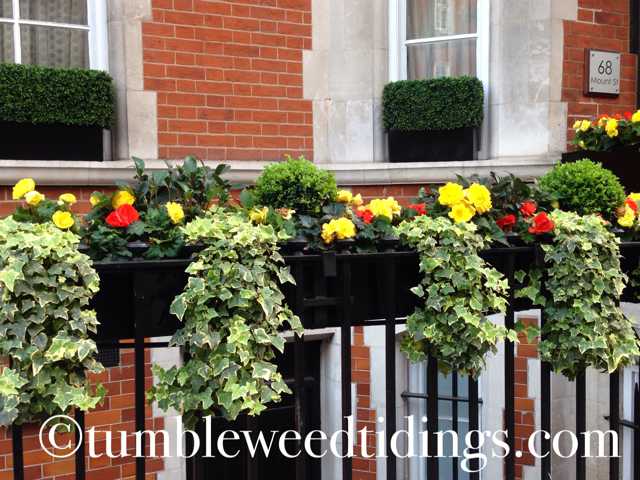 Greetings from Tumbleweed Tidings!  I know many of you are probably wondering where I’ve been.  Today, I am sharing a blog I wrote last week while visiting Scotland. As I write those words, I can hardly believe it myself, but my husband and I just returned from a long planned, long anticipated, 18 day trip to the United Kingdom.  I apologize in advance for the number of flower pictures…I may have gone a little crazy! 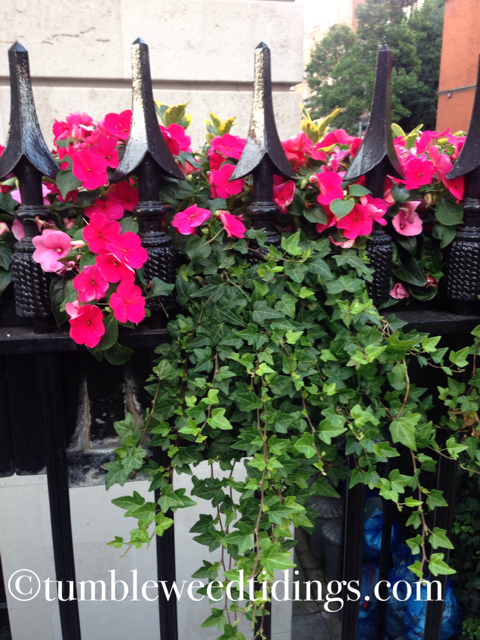 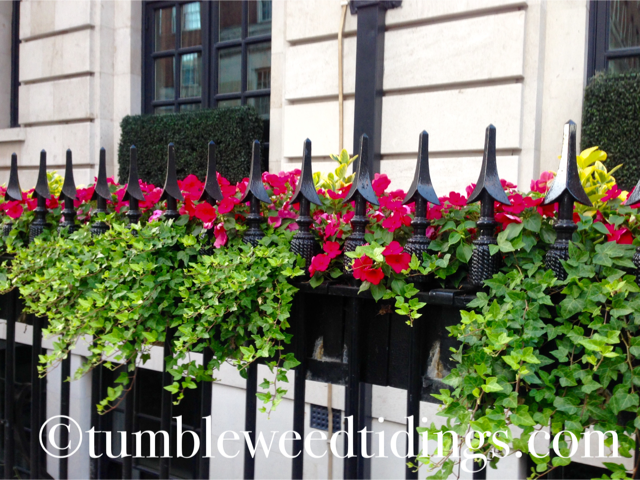 We began our journey with five days in London, which was bookended by the London Philharmonic Symphony at Royal Albert Hall and ended with the live stage performance of Hamilton at the Victoria Palace Theater. In between, we enjoyed High Tea in the Diamond Jubilee Room at Fortnum and Mason department store, a cruise on the Thames River, and visited the Tower of London, Buckingham Palace, Westminster Abbey, and the Churchill War Rooms. Heady stuff for me on my first trip across the Atlantic!

Before our trip began, we were at dinner at the home of some friends. Another couple at the dinner, themselves frequent travelers to England, quipped “In London, if you like the food, you’ll love the weather.” We all laughed. I will admit, however, that they may be partly right. While all of our dinners were wonderful based on the recommendations from the hotel concierge, some of the breakfast and lunches were not quite as good. As for the weather, the first few days were very hot and humid, but it cooled nicely after that. 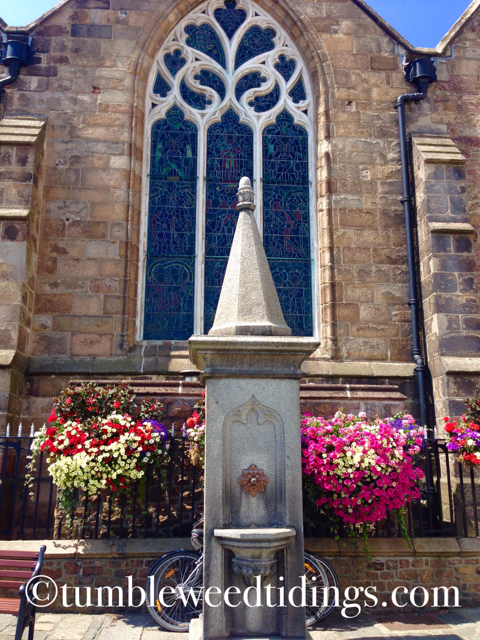 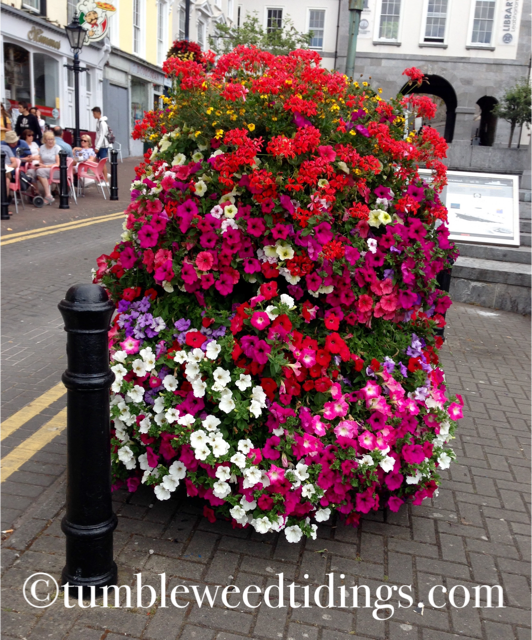 But food, weather and activities aside, what captivated me at every turn in London were the flowers. Perhaps it is because their summer season is short, or as the Thames tour guide called it, “their 6 days of sunshine per year,” that they grab every opportunity to grow something bursting with color. Whatever the reason, they were just lovely. Our hotel lobby was full of floral arrangements. Almost every horizontal surface had beautiful bouquets of green, white and purple. 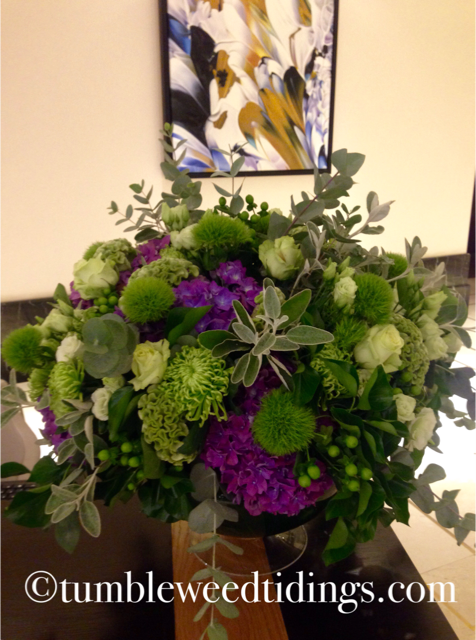 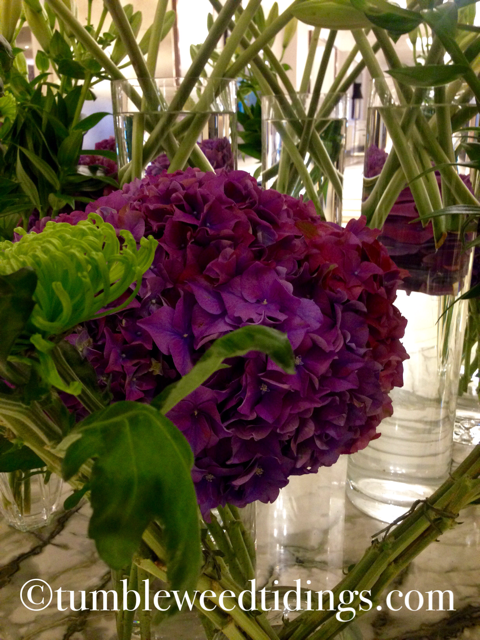 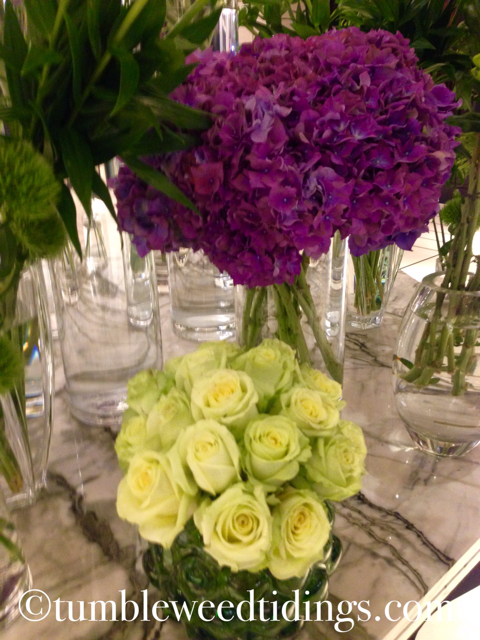 Upon walking through town, I started noticing other florals in those same colors. After a while, it became obvious that this color combination had some significance, but I didn’t know what. And then an arrangement in a window tipped me off…Wimbledon was being played during our visit, and those were the official colors of the tennis tournament. 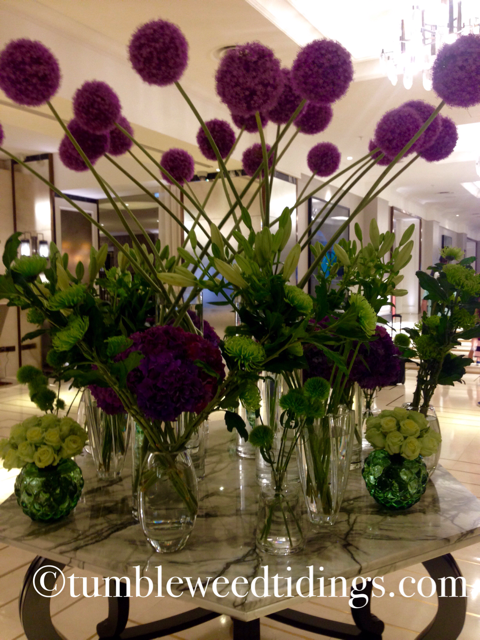 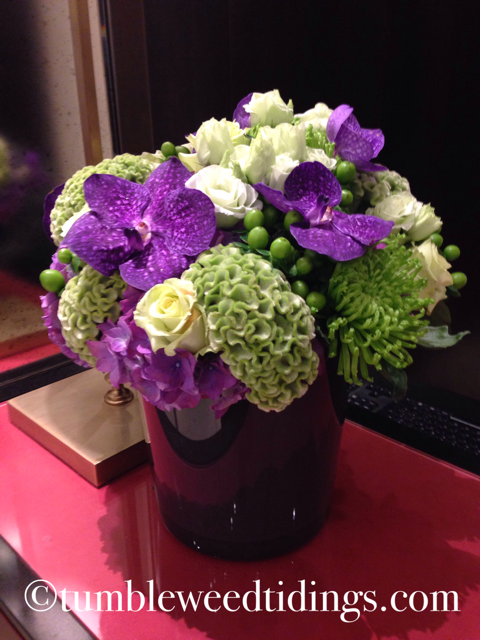 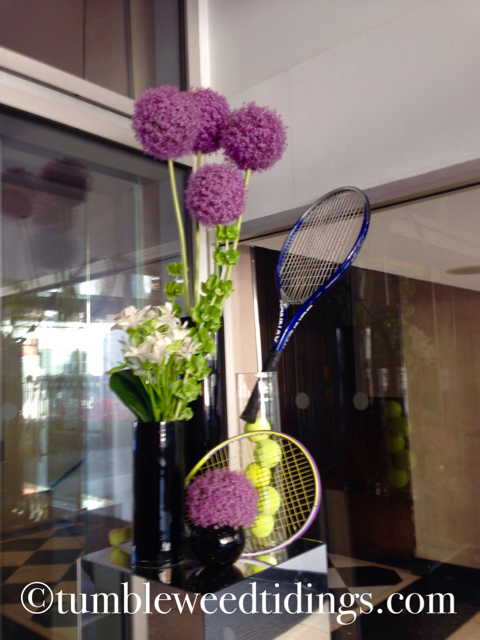 In addition to the flowers in restaurants and hotel lobbies, as we were walking to our various activities, they were everywhere we looked. Every row house, balcony and wrought iron gate was typically adorned with window boxes, wrought iron railing containers, potted planters and the like. Basement apartments decorated their stoops, and the pubs and restaurants got in on the act, as they welcomed guests with hanging planters full of gorgeous bouquets. Of course Buckingham Palace, never one to be outdone, had glorious flower beds flanked by British flags. It was all pretty and welcoming. 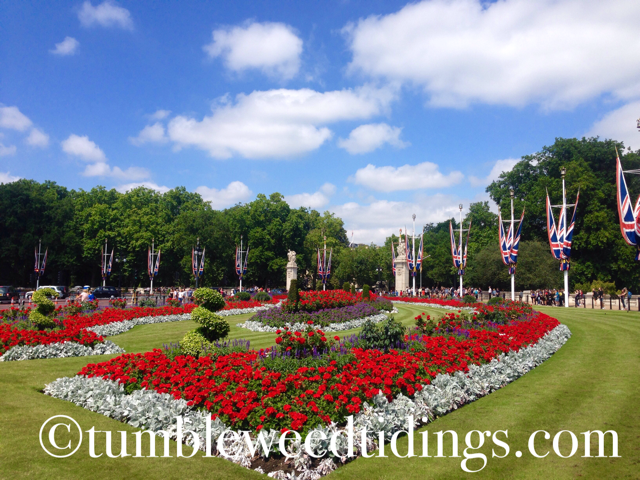 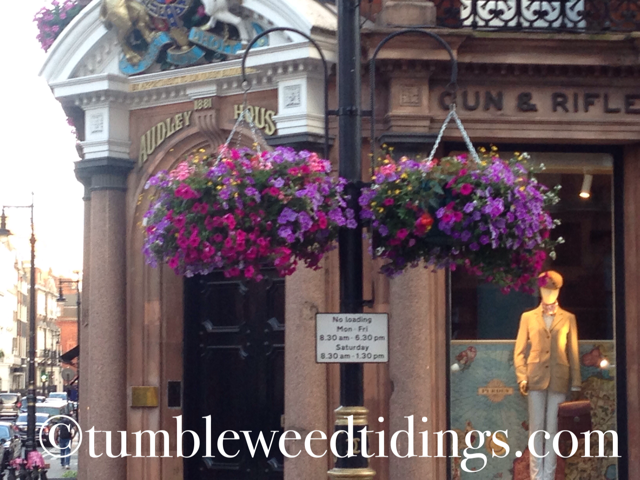 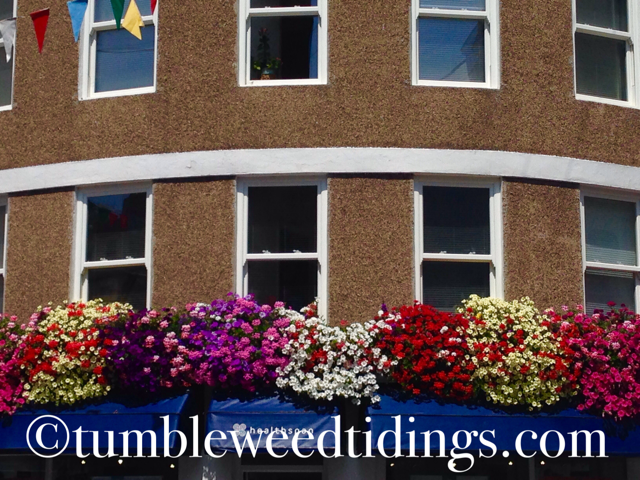 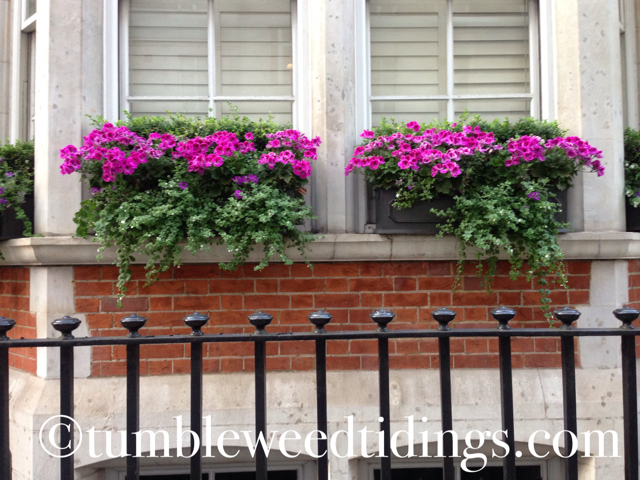 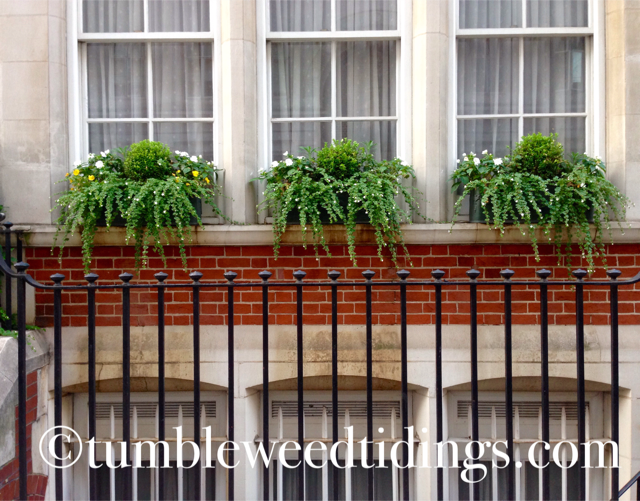 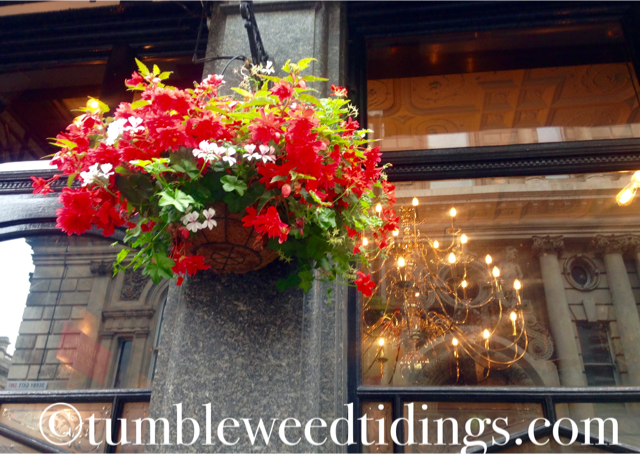 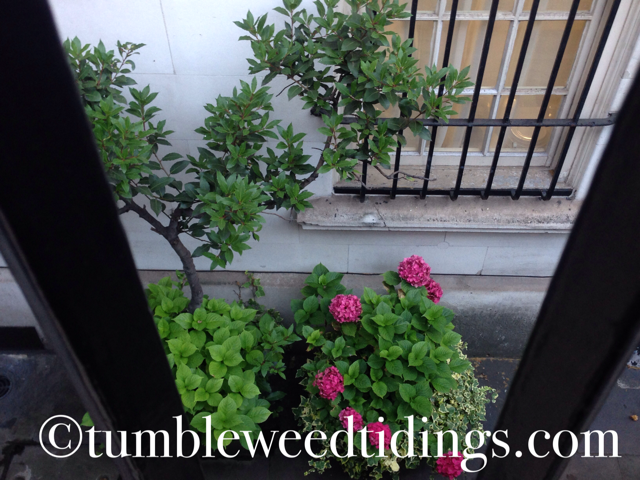 Our five days in London coincided with so many major activities, and you could feel the excitement in the air. As mentioned, Wimbledon was in full swing (pun intended), England won their semi final match for the World Cup (and the city went CRAZY!), England was celebrating the 100th Anniversary of the Royal Air Force, which was commemorated by the queen visiting Westminster (no, we didn’t see her) and a flyover of 100 aircraft from London’s fleet (which we did partially see from our vantage point at the Tower of London).  It stands to reason that in a city of 9 million people, there is almost always something exciting going on, and we were happy to be a part of it. 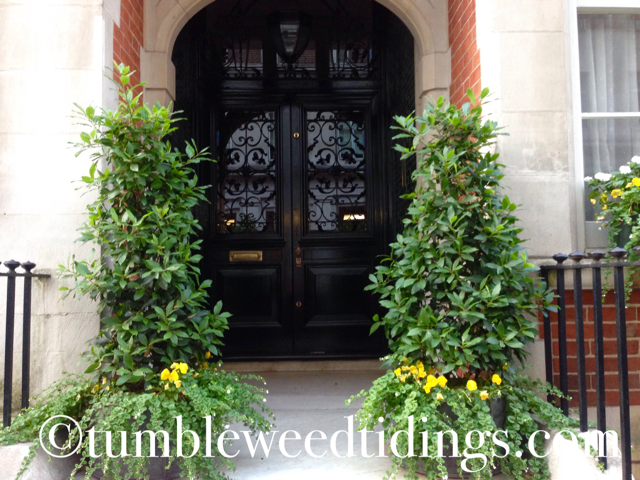 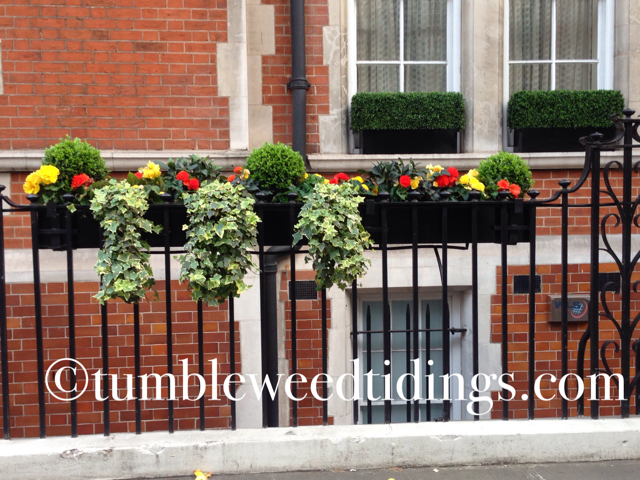 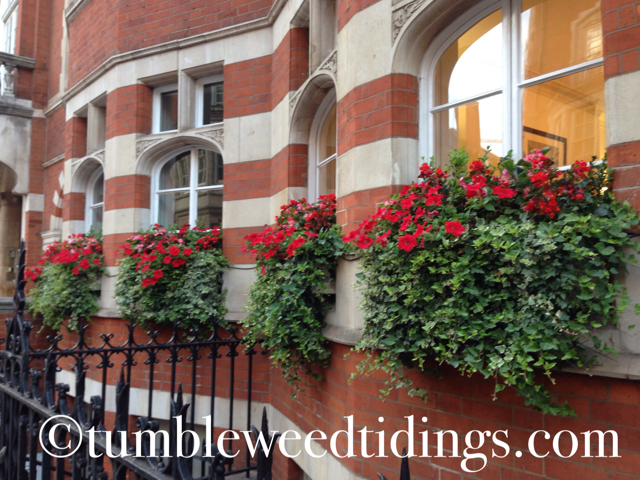 We left London somewhat sadly, but anxious to board our cruise out of Southampton for 12 days touring Ireland, Scotland, England and France ports of call. As I write this, I am still processing all of the memorable experiences, the wonderful and friendly people in each country, and the treasured museums and churches we sought out in each culture. 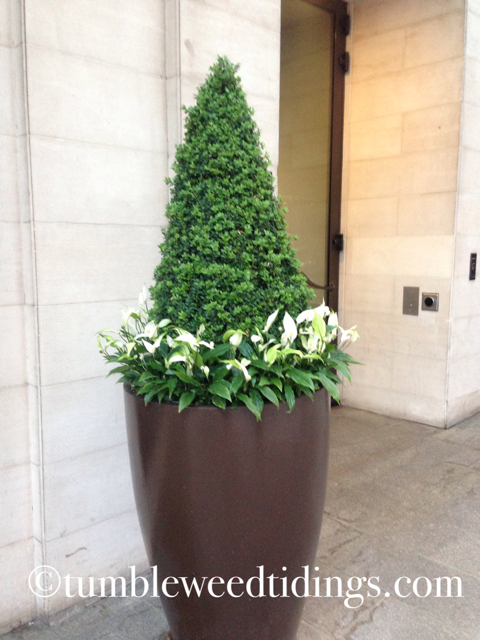 The UK is full of history, beauty, and wonder at every turn, which I was somewhat prepared for. But those absolutely amazing flowers? Their beauty was such a wonderful and unanticipated gift that their memory will stay with me for a very long time.