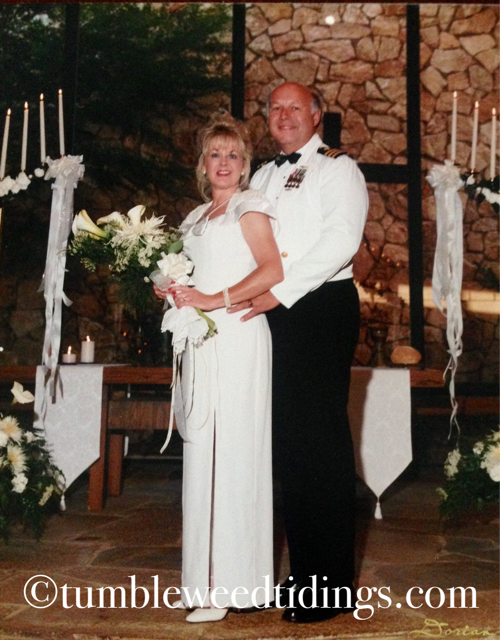 As mentioned in my bio, for the past six plus years I have been the Wedding Coordinator at our church. In this capacity, I have worked with about 20 brides and grooms, as well as their extended families and wedding parties.  On two occasions, I have also coordinated an in-house reception.

Not to be confused with a Wedding Planner, the Wedding Coordinator acts as the liaison between the bridal couple, the church facilities and the pastor. Typically, I arrange for musicians, audio visual technician, custodial staff, rehearsal ccordination, prepare the Marriage Certificate for signing, and assist with decorating the sanctuary if needed.  Typically, I meet with the couple twice before the wedding, and have several more phone and email conversations with them.  I am not involved in any selections of reception venue, colors, time and date of the wedding, wardrobe, flowers, or any of the myriad of details a bride can be tasked with.

During this time, I have had a front row seat, so to speak, to the inner workings of the months, days, and final moments that lead up to the refrain of “Here Comes the Bride” …or their music of choice.  From this vantage point, I have learned a thing or two that might help future brides, grooms and their families have the wedding experience they imagined and avoid pitfalls that can make this a very stressful time.

With that goal in mind, today I’m sharing The Six Things I’ve Learned being a Wedding Coordinator.

Block out the external noise. This is your day. You and the groom are the stars of the show. This is the legal, and often religious, ceremony that bonds you as husband and wife. First and foremost, it should reflect the desires and personalities of the bridal couple. It is not uncommon for everyone involved with the wedding to have strong opinions as to what should and should not be done.  The most serene and contented brides I’ve seen are the ones who have calmly stayed true to who they and their groom are, and what they want the day to include. Within the policies of the venue and the parameters of the budget, make this the memory the two of you will treasure throughout your marriage. 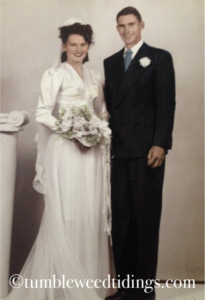 Sometimes less is more, and sometimes more is just, well, more. We have had weddings where the family had florists come in and decorate the sanctuary in an absolutely amazing array of urns filled with beautiful flowers, creamy tulle lining the aisle, and pew bows with satin cones filled with roses and cascading ivy. In a word, it was stunning. The only problem was that the urn arrangements were so large and heavy, they required the florist to bring them in with hand trucks. After the ceremony, there wasn’t a way for the wedding party to move them to the off-site reception, so they had to stay at the church until Monday when the florist reclaimed the urns. The members of the church were able to enjoy these gorgeous arrangements the next day during our worship services, but at a cost of over $700 for two arrangements for less than a one-half hour ceremony, this is a beautiful, but costly addition that might be difficult for some to justify.

On the other hand, I have had couples who have had no decorations whatsoever. One couple got married right after New Year’s and the sanctuary still had all of the Christmas décor in place. The bride put two roses on the Communion table to represent her deceased parents, and that was all. The wedding was beautiful in its simplicity, and I still see this couple holding hands in church every Sunday, over six years later.

One thing to remember about churches is that most are already beautiful without too much additional adornment.

Spend what you feel comfortable with and take advantage of what is provided. This is somewhat of a follow-on to item 2, but I felt it deserved its own space. I have had more than one bride sheepishly tell me that they didn’t have the budget to do much other than what we can provide at the church.  That’s when I look these sweet brides in the eye and give them The Talk.  It goes something like this: “Over the years, we have had extravagant weddings and simple weddings, and just about everything in between. A modest budget is nothing to be ashamed of, and I do not believe there is any correlation between how much someone spends and how successful the marriage will be. In fact, the opposite might be true. At the end of every ceremony, there is one thing that is true, no matter how much money was spent. They were married.”  This usually puts the couple at ease, and puts things in perspective.

Most churches own brass candlabras, runners, artificial flowers arrangements, tulle to swag on the pews, and the bases and holders for Unity Candles, all available for free if the couple wants to use them. Often, once I know what else a couple might need, I have brought items from my stash at home such as candleholders, artificial flowers in their colors to add to the urns, etc.  So to recap, spend what you can afford, take whatever is provided, and most of all, enjoy the day.

Plan all photo shots with your photographer ahead of time. This should go without saying, but more and more, couples are using “Uncle Vinnie” to take their pictures because he takes great photots, is amazing, cheap, fantastic and did I mention cheap? The problem is, because he is not a professional, he may not have thought about how important a list of shots is. DO NOT SKIP THIS STEP or your guests will be at the reception, waiting for you to arrive, and will often leave before you can make your entrance. Even if you have pictures taken before the wedding, there are invariably group shots that can only be done after, once all of the various extended family members arrive. Trust me on this. I have seen after-wedding pictures go on for an hour or more. Wouldn’t you rather be basking in the afterglow of the wedding with all of your guests who came to spend this special day with you?

There aren’t too many untried ideas. Thanks to Pinterest, Blogs, and other formats, there are amazing ideas out there for giving your day have that special touch. During many weddings, the Unity Candle is typically used to represent the melding of the couple. This is often accompanied by a special song done with musicians or a soloist. Today, some couples are choosing to use variations on this custom.  One couple braided strands of yarn while the pastor read an appropriate Biblical passage. Twice, I’ve had couples use the sand jar, where you start with two vases with colored sand, and the bride and groom take turns pouring from their vases into a larger vase, signifying the blending of their relationship. The idea behind this, I believe, is that they will display this blended vase on a mantel or dresser for years to come.

Another idea is where the bride and groom each take a long stemmed rose, either from the arrangement or hidden under the table, to each others mother. Because the mothers are not expecting this, it is usually a very special moment.  The ideas go on and on.  A ring bearer carrying the rings in a locked safe?  Yes.  A dog with a chalkboard sign around his neck saying “Here Comes the Bride?”  Uh huh. A mauve fainting couch with beautiful chandeliers and an arbor dripping with crystals? So cool. (That made for such fun bridesmaids pictures before and after!) The bride singing during the ceremony? Lovely.  The point is, there are many unique touches you can incorporate into your ceremony, and that is what will make your day memorable.

Something will most likely go wrong.  Gasp!  During the many weddings I’ve coordinated as well as some I’ve attended, something usually goes wrong.  It won’t usually be anything major, but either behind the scenes, before or during the wedding, something unexpected might happen.

One of my couples forgot to get the license very far in advance.  When the mother of the bride, who had come in to drop off checks, was asked about where the license was, the look on her face was priceless.  They got the license, but the first day it was valid was the day of the ceremony.  #cuttingthingstooclose.  With so many details to tend to, this might be the most important one, and in most states, the license can be taken care of 60 days before the wedding.

Never underestimate the power of nerves to jangle even the coolest of cucumbers.  Just getting the wedding party lined up for the processional can be a challenge.  No matter how many times we do it at the rehearsal, someone will invariabley ask “who do I follow?” That’s when my handy dandy processional list comes into play.  The flower girl who was full of self confidence the night before, will have a stage 3 meltdown right before it’s her turn to walk down the aisle and go running up to mommy, who just happens to be the Maid of Honor.

My oldest daughter got the legit stomach flu before the wedding, so there was a trash can hidden behind the altar, just in case.  Thankfully, there was no incident during the actual ceremony, but it made for some nervousness to be sure!

At one of the first weddings I coordinated, I got into such a rhythm sending grandmothers and mothers down the aisle, I sent the first bridesmaid down before the pastor had brought the ushers and groom in. Noticing my error, he hustled them out before she got to the end of the aisle. It took me a while to live that one down. #rookiemove.

Remember the layering sand option mentioned above? Well, sand is known to clump. You guessed it, when the groom started pouring his sand, it came out in a gush. The bride calmly reached under the table and grabbed the funnel we had left there, just in case that happened. This got a big laugh from the guests, and the couple  went on happily layering sand.

Maybe wrong isn’t the correct word, but something will go other than you had expected. Some of these moments will be funny, unfortunate or inconvenient. How you handle them will set the tone for how everyone else reacts. So go into your wedding without expecting perfection and you won’t be disappointed.

So that’s my list of six. I could probably fill a book, and maybe someday I will.   Jim’s and my wedding was one of the happiest days of my life, and I wouldn’t have changed a single detail.  The truth is, I love, love, love weddings.  That, and the fact that I am extremely organized, might be why I was chosen for this position.  Either that, or no one else wanted the job….one of those.  Regardless, every time I see a bride head down the aisle, I get a little teary eyed.  Tears for the love, excitement and promise of the future they will spend together.

The wedding is over, the license is signed, and now it’s time to go out and make a marriage!