Have you ever had a room, or an area at your home, that just wasn’t working? It might look nice, (or not), but nobody uses it.  It just sits there, taking up valuable real estate in a completely nonfunctional way.  Until recently, that was the case of our covered patio.

We are so fortunate here in Southeastern Washington to have an average of almost 200 days of sunshine a year. Some of those days come in the form of 100 plus degrees.  Some come with their share of wind and the occasional tumbleweed stampede.  But on the overall, outdoor living is totally doable much of the year.  So imagine our dismay when we have this lovely north facing covered patio overlooking our yard, city lights and the pool, and it was rarely used. 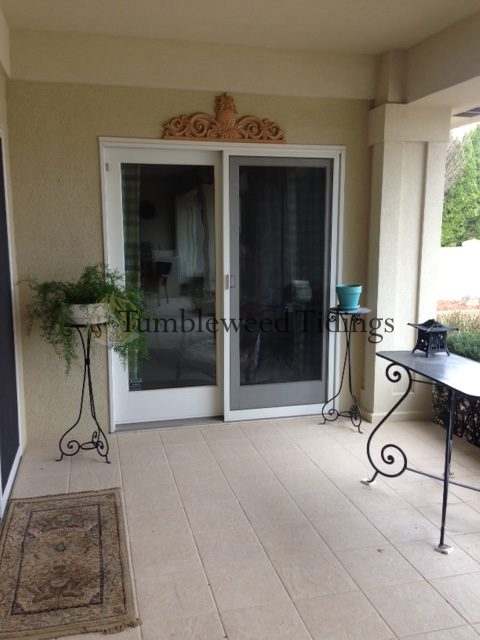 So, I did what I always do when faced with a problem. I think about it.  A lot. Often. Incessantly.  Until I have that moment when the puzzle is solved and I can get to work on a plan.

On the surface, it probably looked fine. And in the matter of full disclosure, the cushions were still in storage when this picture was taken, so it looks a little vanilla.  But mainly, it was a very large dining room with a couple of other chairs and a loveseat scattered around.  We have held some nice parties on the patio, but rarely used it when it was just us.  The fact that we wanted to use it more on a daily basis became my motivation.

My plan was to make it a comfortable seating area as the primary focus and make the dining area a secondary zone. The wrought iron loveseat makes a nice place to sit and read or have a beverage.  And of course the BBQ and refrigerator (hidden around the corner in most of these pictures) make up the fourth area, which is all about the food and drink part of entertaining. 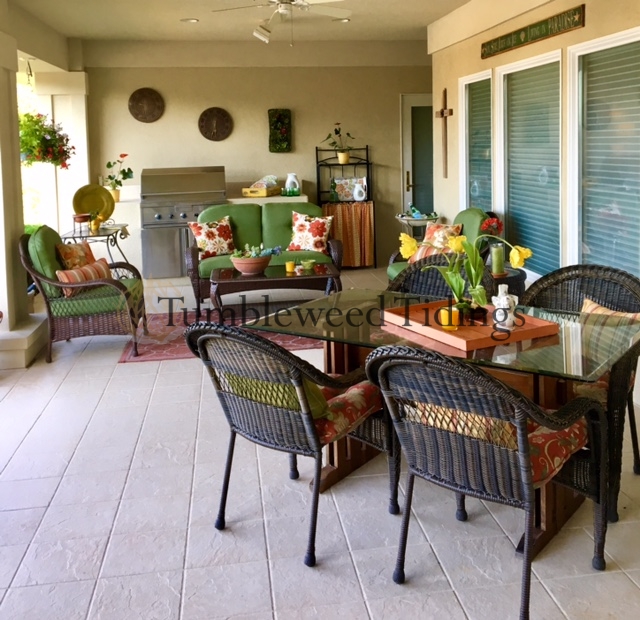 Here is what the patio became after a few simple changes. We added a wicker seating set with a loveseat, two chairs and a coffee table, which are BHG from Walmart.  The set included the cushions and decorative pillows, which perfectly coordinated with our existing two year old Pier 1 cushions.  We also added four dark brown wicker chairs from Lowe’s to put at the dining table. 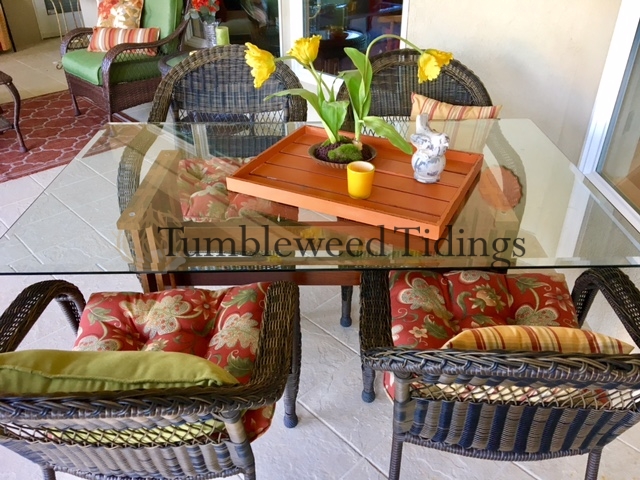 We repurposed the six older wicker chairs and bistro table by moving them up to our bungalow in Idaho, where they fit nicely on the porch. The small lighter side table was spray painted brown to match the new wicker pieces.  We purchased the new hanging baskets, a yearly tradition, and put some annuals in the pots. 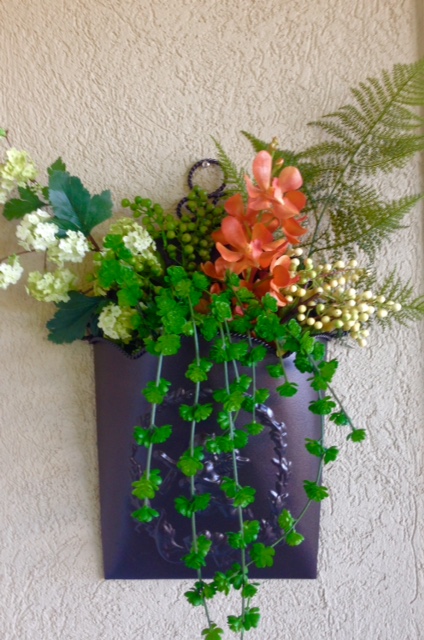 The metal tin above was found at a local antique store for $10. It was painted navy blue, but they had left the tag on the back that said Southern Living Home.  I snatched it up, spray painted it brown and filled it with artificial flowers and succulents to reinforce the color scheme.. The rest of the accessories were things we already had, making this a relatively inexpensive makeover, especially if it will now get used to its full potential.

One of the many things we like about this new arrangement is that the loveseat and chairs create a nice conversation area for four. But if there are more people, it is easy to swing some of the dining chairs around to form a seating area for six or eight.  This leaves the dining table free for a buffet situation, if needed. 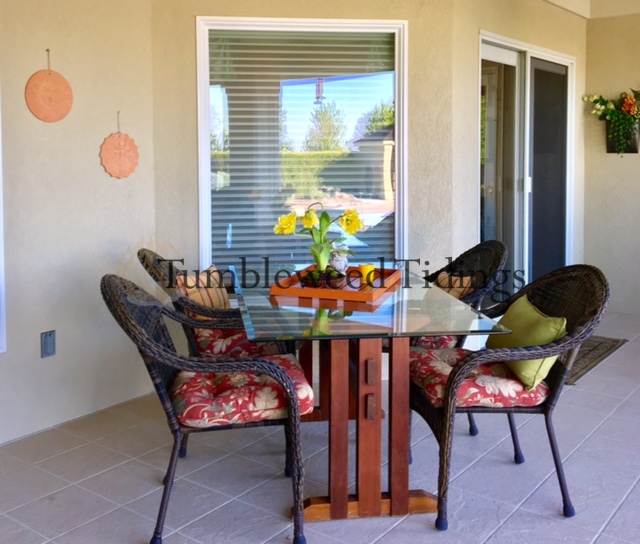 The summer season has barely started, but already we have used this new arrangement often. Last night we dined alfresco with guests, and it was just a perfect arrangement, with the table even closer to the kitchen than it was before.

As we look forward to the warm summer season, we have plans for kids and grandkids coming from out of town, as well as local friends and family joining us for fun times.

It is possible with a few changes and rearranging some items you already own to make a nonfunctional space the new showstopper of your home.

I love it when a plan comes together!